Went out onto Cockburn Sound this morning in my kayak hoping to capitalise on the strong winds we had earlier in the week. Rumour has it that winds blow the fish in …

Anyway, I got up really early and launched at about 4.30, hoping to find the fish quickly. As it turns out, I should have slept-in until about 5.30.

At around 6.30 (still too dark to fly fish for me), I came across a sniff of midsized fish on the sounder and turned the yak back to drop my SP onto the school. On the first drop, the line started peeling off the spinning outfit in that characteristic snapper hit I'm used to seeing. I flicked the bail arm over and laid into the fish on the 20lb outfit I was using. After about 20 seconds, the leader knot slipped. I'm not going to spell out the words that followed my leader away from the yak …

I tied a new leader on and dropped another SP down on the spin outfit, but the fish had wised up to the fact that this bit of plastic may not be a tasty meal after all. They were there, and they were following my SP down to the bottom, but they just didn't want anything to do with it.

Given that is was getting light enough that I didn't need a glowing SP any longer, I felt it was time to drop a fly onto these fish. I wound in the SP and laid out the sinking fly line. Once I found the fish again, I hit them with the fly, letting it drift down. 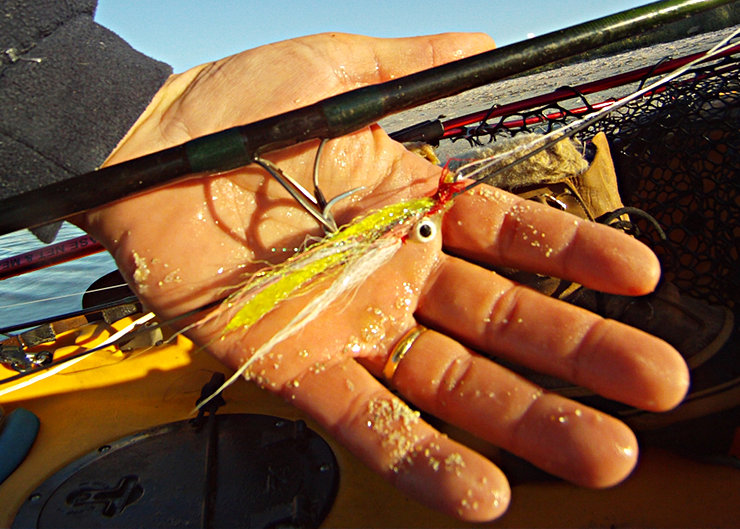 The fly: a chartreuse on white Clouser with white lead eyes

It didn't take long for these fish - which were by now filling my sounder's screen - to decide: THIS is more like a meal!!! Whack! The rod's tip speared into below the surface and the line thrummed as it moved sideways through the water. I knew I was near a reef, so I was determined not to let the fish have any ground. I gripped the spool as hard as I dared, stopping the fish in its tracks. On the rebound, I was able to claw back line in readiness for its next run. I didn't need to wait long for that, either. Once again the fish dived for the rocks and, as before, I refused to give line. (With a 20lb tippet, I could really give the fish heaps on the 9wt outfit.) In less than 2 minutes, I had the fish up on the surface and subdued. Seeing it was "only small" at around 60cm and that he was very well hooked, I didn't bother with a net and just lifted him in by the leader.

After dispatching and storing the fish, I saw the school had stayed below me, so I quickly dropped the fly back down. Immediately, I was rewarded with another taught line and plunging rod tip as a fish took the fly without any hesitation. Once again, I palmed the spool hard to stop any line pulling out. Again, after a short battle, the smallish (56cm) fish came alongside the yak and I lifted it in by the leader.

I had my bag limit now, but the fish were still around, so I cast the fly back out a few more times. Again, a solid take had me palming the reel and dragging a fish to the surface. This one was lucky he had two greedier friends, and without lifting him from the water, I released the ~60cm fish by flipping the fly out with the pliers. It was turning into a great morning of fishing, and it had all happened in about 30 minutes.

I once again flicked the fly out, and several casts later, I had the last hookup of the morning. Unfortunately, I pulled the hook on this one, but by now, it was time for me to head off anyway.

I had certainly had my best morning of fly fishing ever, landing three fish that Eastern-Staters would be proud of.

It's a great feeling landing a fish on a fly I had made myself. I just need that Sage reel I'm waiting on to make the experience even more pleasurable. 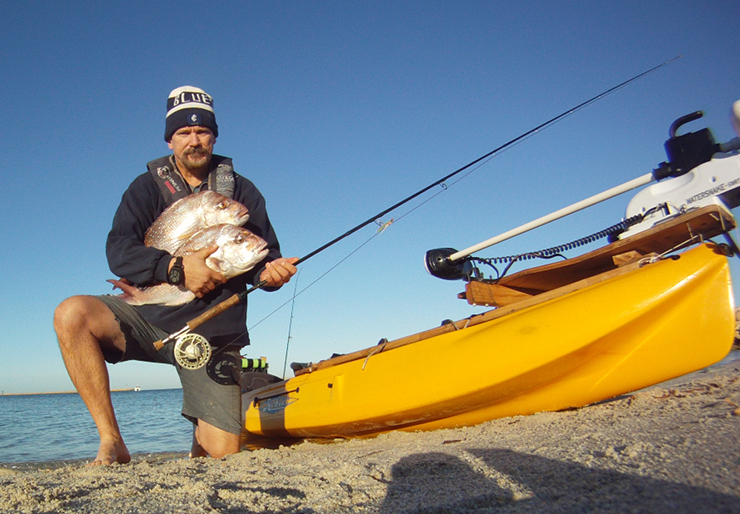 The two fish I kept and the equipment that did the damage. 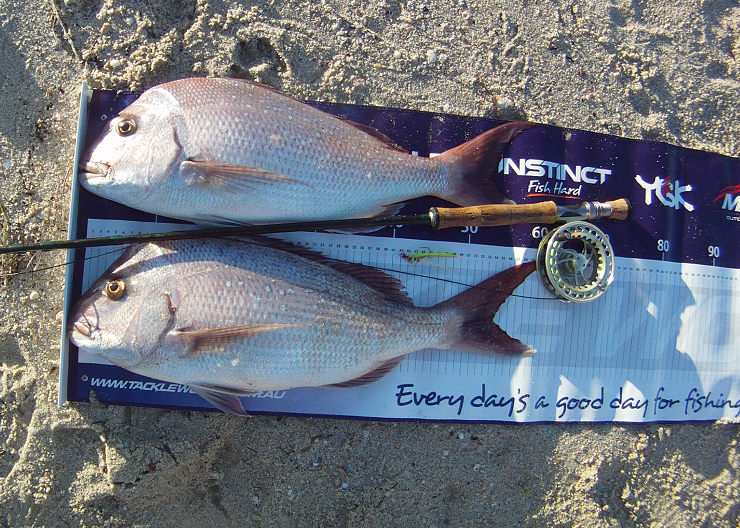 A couple of good family meals there.

Dave invited me out this arvo on his boat and we were fishing a few lumps around stragglers. Stuff was showing on the sounder but I think our problem was the anchor not hooking up and we were drifting too far off the lumps.

Got bugger all except for Dave hooking up something that went screaming off on his ultra light spin gear and a plastic only to have the hook bend!
Top

Gee I wish the fishing is this hot when we go out Graeme! next time

well done mate! what a great day! hopefully I can
have this much luck in exxy next week!

awesome report - especially since you fished from a yak, I suppose a sinking line is essential
Top

I bet snapper never tasted so good!
Top report and what a day's fishing.
Top

Rudi wrote:awesome report - especially since you fished from a yak, I suppose a sinking line is essential

Actually, no it's not. The first snapper I caught on fly from the yak was a fish of around 80cm which took a clouser flicked out by a floating line. Once again, the water was 10m deep. Admittedly, I had a twisted FC leader and tippet totalling around 12', but the fly was able to get down into the zone about 20 seconds after the cast landed.

I didn't have any photos of that trip, so no report was made. I released that fish, too.

Since then, I have hooked fish on both floating and sinking lines. I'm still testing to work out what method I'll settle on (currently I prefer the floating line because I find it easier to deal with, but I'll see where experience takes me.)

Oh, and the fish was great for dinner last night. I even gave my mum some fillets for Mothers' Day.